Ayurveda was the first health science to recognize that different things can create balance or imbalance for different people. It also identifies an underlying framework that supports the ideal functioning of the basic human physiology. For instance, recommendations such as going to bed before 10 P.M. eating one’s main meal at noon and waking up early in the morning are recommendations that will enhance the health of everyone.

Having a balanced physiology results in a balanced immune system. You probably know people who have been healthy all their lives. These people probably had a strong immune system to begin with. According to Ayurveda there are three types of immunity:

Natural immunity comes from birth. When both parents are healthy and in good balance and if the “family tree: has had a long line of healthy people, it is often the good fortune of the children to inherit that strong immune system. For this reason, Ayurveda recommends that parents-to-be undergo a three month period of purification prior to conception.

Acquired immunity results from the choices you make every day. Examples are organic, fresh foods, enjoying exercise that does not deplete the body’s strength, following a regular daily routine, going to bed on time, eating at the right times and enjoying regular purification (Panchakarma) to eliminate impurities from the cells and tissues of the body.

According to Ayurveda, perfect health is not just the absence of disease, but rather, life in balance, life in wholeness, life in complete happiness. The goal of an Ayurvedic expert is to identify which factors in your life are causing your mind/body system to be out of balance and to help design a routine, diet and lifestyle that will support your continued health and vitality.

When guests are given their going-home recommendations at The Raj Ayurveda Health Spa, we encourage them to use spice mixtures, called “churnas”, when cooking. One reason is that these spice mixtures contain all six tastes and that they help keep the doshas in balance. Another reason is that churnas contain herbs and spices that promote health.

Today we are going to focus on turmeric, the yellow-pigmented spice that is an important ingredient in all of the churnas. Turmeric has traditionally been used in Indian cuisine and in Ayurveda herbal medicine. Ayurveda practitioners prescribed the spice to reduce inflammation and joint problems, to treat digestive disorders, and to address skin disorders. Due to turmeric’s heating quality, it helps to balance Kapha and Vata doshas and due to its bitter taste, it helps to balance Pitta dosha.

In recent years, turmeric has become well known in main-stream America for its medicinal benefits. Nearly 7000 studies and scientific articles have been published on the medical effectiveness of compounds in turmeric in areas such as chronic inflammation and pain, rheumatoid arthritis, diabetes, cancer, and brain health and memory.

How To Use Turmeric

Before I get into the wonderful details of how turmeric supports health and longevity, I wanted to highlight how best to use turmeric. Over-cooking turmeric can easily destroy the fragile molecules of the important medical compounds contained in the spice. To retain the best of both taste and health, add turmeric after you have cooked your soup, grains or vegetables.

Start with melting ghee in a frying pan until it becomes clear. Then add turmeric powder and mix it into the oil. Remove the frying pan from direct heat and allow the spice to simmer in the hot oil for 5 minutes, or until it turns a slightly darker color and releases its aroma. Pour this over your already-cooked food or add it to your pot of already-cooked soup, and serve.

When storing turmeric, it is good to protect the spice from the light and heat. Store turmeric in a dark, cool place.

Now let’s look at the wealth of benefits offered by turmeric.

Curcumin is the most well-studied bioactive ingredient in turmeric, exhibiting over 150 potentially therapeutic effects. Curcumin is also capable of crossing the blood-brain barrier. This is why is it is good to add turmeric to healthy fats used in cooking, such as ghee and olive oil. The addition of turmeric allows the fats to be utilized by the brain. Our brains are composed of 60 percent fat and the brain needs fat in order to work properly.

Curcumin has been investigated for its potential role in improving Parkinson’s disease, Alzheimer’s disease, colon cancer, and stroke damage. It can also promote brain health in general, courtesy of its potent antioxidant and anti-inflammatory properties, as discussed more below.

Amazingly, Curcumin has the ability to modulate as many as 700 of our genes. It can also insert itself into our cells’ membranes, changing the physical properties of the membrane itself by making them more orderly. Curucmin also has the ability to affect signaling molecules. For example, curcumin has been shown to directly interact with inflammatory molecules, various carrier proteins, cell survival proteins and DNA and RNA.

Curcumin is not the only important ingredient in turmeric. Aromatic-turmerone is a compound that can increase neural stem cell growth in the brain by as much as 80 percent. Neural stem cells differentiate into neurons and play an important role in the brain’s self-repair mechanisms. This suggests that turmeric could aid in the recovery of brain function diseases such as Alzheimer’s and stroke

Curcumin has been shown to help inhibit the accumulation of destructive beta-amyloids in the brain of Alzheimer’s patients, as well as break up existing plaques. In addition, people with Alzheimer’s tend to have higher levels of inflammation in their brains, and curcumin is perhaps most known for its potent anti-inflammatory properties.

Given the astounding health benefits of adding turmeric to soup, grains and vegetables, we recommend making the use of this wonderful spice a daily practice.

One of our top recommendations to guests at The Raj as they head home is to continue with daily oil massage (abhyanga). The effects of daily Ayurveda oil massage (recommended before bathing in the morning) are multifold. Not only will a morning oil massage help pull toxins from the skin (the largest organ in the body and an important organ for the elimination of toxins), it also leaves a protective film that acts as a barrier between your skin and harmful environmental elements. 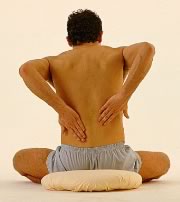 While oil massage helps balance all doshas — especially when you use oil infused with herbs that specifically target Vata, Pitta or Kapha — it is especially good for balancing Vata. I know many people who never travel without a small container of sesame oil. After a long plane or car ride, there is nothing more grounding than an oil massage followed by a good soak in a hot bath. (Add in some Vata tea and aroma oil and you are well on your way to side-stepping the jangling effects of travel.)

But the beneficial effects of oil massage don’t stop there. Research also suggests that sesame oil (the oil most often used in abhyanaga) selectively stops malignant skin cancer cells from growing in laboratory tissue culture, and at the same time allows normal skin cells to proliferate.

According to the study, sesame and safflower oils selectively inhibited the grown of malignant melanoma cell cultures, but coconut, olive and mineral oils did not. The traditional Ayurveda texts specifically recommend sesame oil massage to promote health and longevity.

(One note of caution: sesame oil has a naturally heating property. Those with a Pitta body type or with Pitta imbalances may need to opt for another oil and may react to sesame oil with rashes or redness. If you are in this catagory, you will want to opt for a more cooling oil.)

Researchers have known for years that linoleic acid, an essential polyunsaturated fatty acid that is present in small quantities in the body, inhibits many kinds of cancer growth. But because pure linoleic acid is highly unstable and can irritate a person’s skin and eyes, it cannot be used or ingested safely. In the above mentioned research study, scientists used the whole vegetable oil, rather than trying to isolate the active ingredient, thus avoiding unnatural side effects.

Research also shows that oil massage is an important component in removing synthetic chemicals from our physiology. In the US there are thousands of these kind of chemicals used in various types of industry or agriculture. These toxins are present everywhere in our environment and can be found in virtually every living organism around the world. Regardless of our lifestyle, profession, eating habits, or geographic location, by the time we are 40 years old, our toxin level is substantial.

A study on clients participating in the traditional Ayurveda detoxification and purification treatments (Panchakarma) at The Raj showed that blood levels of these chemicals were reduced by 50% after a 5-day course of treatment. Because these harmful chemicals are fat-soluble, they are able to be “washed” from our fat cells by the deeply penetrating sesame oil (as well as by other components of the treatment program.)

Integrating a 10-minute sesame oil massage into your morning routine can have a significant impact on reducing Vata imbalances, purifying the skin and maintaining balance throughout the body.

To learn more about the research on removing fat-soluble toxins through the detoxification treatments of Ayurveda (Panchakarma), visit The Raj website: