I love when modern researchers spend time and money to tell us things that our parents and grandparents took as basic common sense. That said, it is fascinating to learn the specifics of why certain things are good for you. I have to admit; every time I come across a new study I gain a new appreciation for various foods. This week I’m going to share a few studies that especially tickled my fancy. 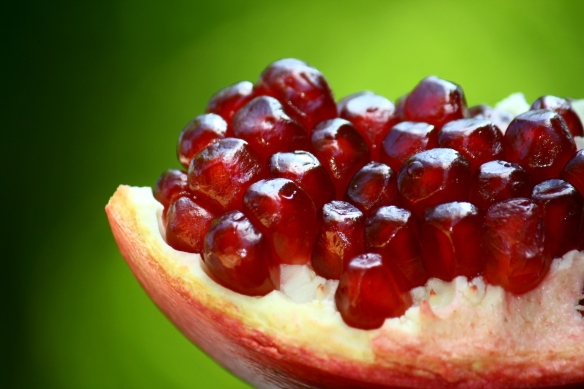 Pomegranates = The Fountain of Youth!

After experiments with worms and mice produced results that researchers called “a miracle…nothing short of amazing”, studies are now starting on humans. Apparently the fruit contains chemicals that our stomach bacteria turn into urolithan A — a compound that helps strengthen muscles and extend life by supporting our mitochondria. Mitochondria are rod-shaped structures within our cells in which the biochemical processes of respiration and energy production occur. They are known as the power generators of our cells. Pomegranates seem to have the ability to keep these “battery packs” charged. And to recharge aging cells, which tend to weaken and run down over time.

This information adds to past research on the health benefits of pomegranates. Pomegranates have anti-oxidant, anti-viral and anti-inflammatory properties. They contain vitamins A, C and E, as well as folic acid. They have been show to help lower high blood pressure and strengthen bones. They also have anti-angiogenic properties, meaning that they may help to prevent growing tumors from acquiring a blood supply, preventing those tumors from receiving the nutrients that would allow them to grow large. In those with mild memory complaints, individuals drinking pomegranate juice daily performed better on a memory task compared to placebo and displayed increased brain activation.

A recent study in Great Britain found that a higher consumption of fruits and vegetables resulted in higher life satisfaction scores. In fact, going from “none” to eight portions was likened to getting a job if unemployed. The lead researcher observed, “‘Eating fruit and vegetables apparently boosts our happiness far more quickly than it improves human health.” Researchers adjusted the effects on incident changes in happiness and life satisfaction for people’s changing incomes and personal circumstances. They believe it may be possible eventually to link this study to current research into antioxidants, which suggests a connection between optimism and carotenoid in the blood.

Watercress Has It All

This peppery-tasting green tops the Centers for Disease Control and Prevention’s list of powerhouse foods. Why? Because it has been found to be the most nutrient-dense food. Watercress is an excellent course of vitamin C, containing a denser concentration of the vitamin than an orange. Watercress also is an excellent course of vitamin A, B6 and K, as well as calcium, iron and folate. A recent study showed that a daily portion of watercress could have a significant impact on reducing DNA damage to blood cells — an important trigger in the development of cancer.

Can Watermelon Help Weight Reduction?
Watermelon is the perfect summer snack. It has many wonderful health benefits: it contains L-citrulline/L-arginine, an amino acid that lowers blood pressure, thus reducing your risk of heart disease It is also rich in vitamins A, C, B-6 and thiamine, as well as lycopene, a phytochemical that’s responsible for watermelon’s red color and might offer protection against some types of cancer.

And it also turns out that watermelon may help with weight loss. As its name implies, this fruit is almost 92% water, making it a great source of hydration in hot weather. A recent study has shown a connection between weight loss and hydration. Among the people involved in the recently published study (July, 2016), the less hydrated they were, the more likely they were to have a higher body mass index (BMI). Researchers concluded that water might deserve greater focus in weight management research.

Watermelon only has 88 calories in a two-cup serving and one gram of fiber, which slows digestion and helps keep you feeling full longer.

One of the herb’s medicinal properties comes from the antioxidant eugenol. Lab studies found that this compound sparks anticarcinogenic activity in cervical cancer cells, causing them to self-destruct. A recent study indicated that the antioxidant content of basil was highest right before flowering. Growing your own basil allows you to pick basil at its point of peak medicinal value.

Are you inspired? The Ayurvedic texts remind us that fresh foods are optimal, as they contain more of the life energy that our body needs stay healthy and vital. Foods consumed in a state as close to nature as possible provide the most nutrients and the greatest benefit to your health. Do you know that more than half of what American’s eat is “ultra-processed”? These foods, researchers agree, are replacing more nutrient-dense foods and leaving people “simultaneously overfed and undernourished.” No wonder Americans die sooner and experience unhealthier lives than residents in other high-income countries. A return to a more natural diet allows us to take advantage of the perfect nourishment that nature provides.